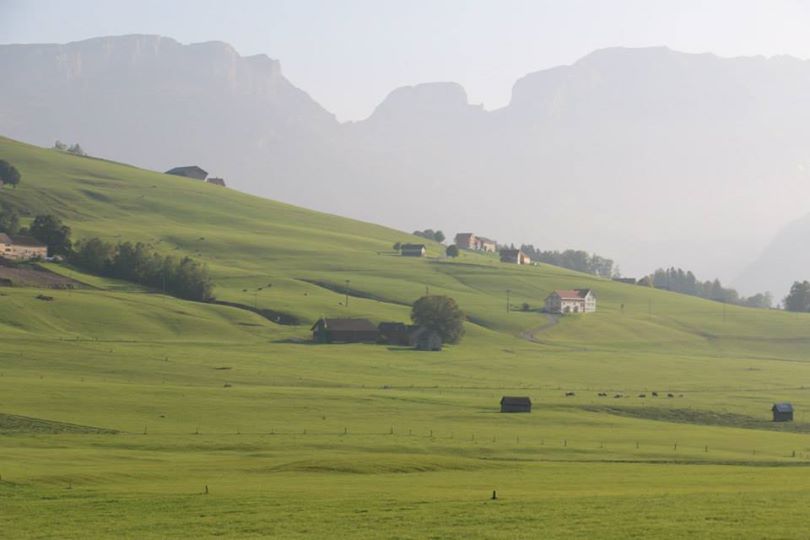 On the 6th day we entered to Italy in order to take a short cut to St. Mauritz in Switzerland. We only planned to drive past Italy but we found the little town of Chiavenna to be charming so we decided to stay for the night.

Due to our tiredness and lack of good sleep I suggested staying in a room rather than a campsite. In Switzerland we usually paid around 50 to 60USD just for staying at a campsite but we paid half the price for a bed and breakfast in Italy. We enjoyed our last Italian meal on this trip and slept in a comfortable bed after a week of sleeping bag life. The coin showers at the campsites were only 5 minutes long so I was happy to wash my hair thoroughly.

On our 7th day we left Italy to Switzerland again. We saw many Italian number plate cars fueling up gasoline at the Swiss side border. Apparently it was one of the few things that were cheaper in Switzerland. We drove through a mountain pass and arrived to St. Mauritz in the afternoon.

St. Mauritz was a luxurious ski resort with streets lined up with expensive brand shops that you can ever name of. We were excited to see why the town attracted so many tourists but found nothing interesting. It had no soul. We got disappointed and decided not to stay here for the night.

Instead we drove off to Chur, the capitol of Graubünden. We stopped at a hill overlooking a small village and made lunch. The panorama view from the back of the car was splendid. I collected another special landscape of my own.

On the way we drove through Albula Pass, an isolated and rough mountain pass. The fog from the mountains poured in as we drove. It looked as if it was trying to block our way. Strong winds howled in the rocky deserted landscape. It was like a scene from Lord of the Rings. It was definitely one of the unexpected highlights of this trip.

Romain said that Graubünden has the most untouched and rough nature in all Switzerland. We only saw very few cars during this drive. About an hour later we found a small village that looked like it was forgotten since the medieval times. I was amazed.

We finally arrived to Chur after it was pitch dark outside. We found a parking spot next to the red light district. The condition at the parking lot was not the best at all but when I thought that this was the last time to sleep at the parking lot, I dearly missed all the nights we spent at the parking lots. There was always a little story behind how we found it and what kind of scenery we woke up to the next morning.

Next day we woke up early to visit the thermal bath. The facility was part of a luxurious resort hotel. There were many brand new porches parked up in the front for some kind of competition prize. We saw many rich old people enjoying the bath. I went swimming in the big thermal pool with my bathing suit. There were fountains, jacuzzis, whirlpools and different sorts of saunas. As the facility was mainly built for health purposes, it took a system where everyone needed to rotate around the pool and not stay at one place. This was new to me and I found it interesting.

After we got out from the thermal bath, we drove to a small theme park called “Heidi, Girl of the Alps Village”.

This village was not associated to the Japanese animation but to the original book. However visitors were mainly Asians who seem to be the fan of the animation. To my surprise there were also quite a few Middle Eastern people, who were probably influenced by the animation too. The main attractions were the replica of Heidi’s house and some walking path. Before making an entrace we saw a postcard at the souvenir shop and decided it wasn’t worth our money.

We then headed to Lichtenstein. Lichtenstein was the 6th smallest country in the world that was dependent on Switzerland for its international politics and currency. Other than finding an extremely expensive sushi restaurant in the centre of the city, I didn’t find anything very interesting. Apparently it was a very wealthy country. I saw porches running everywhere.

After lunch, we drove past Austria and entered into Appenzell in Switzerland. Appenzell was a unique region well known for its Appenzeller cheese. Unlike the rough natures of Graubünden, Appenzell had a fairy tale landscape which consisted many small hills and farmlands.

The town was like a dwarf village with colorful houses and miniature bridges. We felt as if we became Gulliver.

We ate a nice dinner at a popular restaurant in town and drove in a narrow forest path to a campsite on top of a hill. From the campsite, we could see the panorama view of Appenzell. On our very last night of the trip, we talked about a lot of things until the early morning. When I saw the landscape glittering in the morning sun, I knew that my Swiss trip has come to an end.

What an intense journey it was. Because of Romain, I was able to visit places where words simply could not explain its beauty. We spent 24 hrs together but we never fought, I enjoyed every minute we spent together. Our time was beyond special, my heart bled when I thought about going back to the solo journey. Switzerland was a small country but the diverse sublime nature made it a magnificent country. Every town was filled with their own beauty, it made me speechless.

Even if our paths separate and never cross again, I will never forget about this trip and it will forever be one of the best memories of my life.