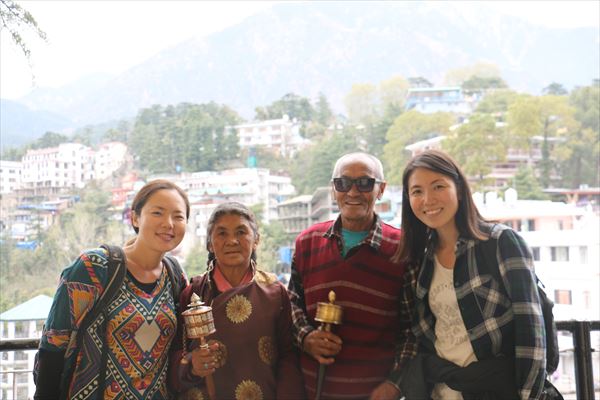 The beaten up bus from Rishkesh took 1 hour to cover the first 5km. After it finally started to run smoothly, it stopped for 2 hour in the forest to change vehicles. I deeply regretted taking local transportation.

In the middle of the night, the bus made numerous stops to pick up Tibetan refugees living in rural areas. It was strange to suddenly see East Asian faces in the Indian countryside. The bus continued through the night on the narrow mountain road. The freezing air came in from under the seat so I was wide awake until the bus arrived to Dharamsala at sunrise. Dharmsala is actually the name of the bigger town that spreads beneath Mc Leodganj, a hill top village that has been home to Dalai Lama and Tibetans since 1959. Before it used to be a forest where the British people enjoyed picnics during the colonial times. On the way to my guesthouse, everyone I passed look familiar to people from home. The Tibetans smiled or bowed back when I said hi. Indians were very few. They sold east asian food on the streets and at the guesthouse they burned incense stick just like my grandma did. Although I didn’t understand a thing of what they said, I felt like I came back home. Loling Guesthouse is run by a Tibetan monastery in South India. It was cheap (350rs=6.5 USD) and spotless. After I took a shower, I went to see my friend. Yuki is a Japanese friend who I met in Mongolia on the second day of this big journey back in 2014. That time she had already traveled 1 year in Asia and was heading west.  She had a strong interest in Tibetan culture so it did not surprise me when I heard that she decided to stay in Dharamsala to study Tibetan. I was impressed to hear Yuki talking to locals in fluent Tibetan. In the afternoon Yuki took me to the Tibetan temple and the residence of the Dalai Lama. First before entering the temple, we walked clockwise in the forest surrounding the temple like real pilgrims did. A few old Tibetans walked at snail’s pace turning the endless prayer wheels one by one. At midpoint we came across a wall with many pictures of young people. Yuki explained to me that they were the ones who committed self-immolation (burning suicide) in order to protest against the Chinese government’s oppression towards Tibet. I was shocked. Underneath their photos were their names, date and place of the self- immolation. One picture showed a young man protesting in the streets of New Delhi while the flames devoured his body. This is the strongest image I have ever seen; no words can describe the anger and sadness it carries. In the beginning I tried to compare this suicide culture to Japan but Yuki said its nothing comparable because the Japanese only killed themselves so that they could escape from pain whereas these young Tibetans sacrificed their lives in order to protect something more important. In the forest where we walked, we met an elderly Tibetan couple who traveled all the from Ladakh, North India to visit the temple. Their traditional attire attracted everyone who wanted a photo with them but they were sad that they could never receive a print. The next day I delivered the pictures to the temple so that they had one to take home. Dalai Lama’s residence was in front of the temple, quite simple and plain if you think its the home of a highly influential figure in the world. He had just came back from his visit to the US and was in residence. However he had some problems with his eyes that time so he was not accepting any visitors.

By walking around the village, I learned somethings I never knew before. One was about the “Missing Panchen Lama”. In 1995, a 6 year old boy believed to be the reincarnation of the second highest rank monk in Tibet got kidnapped together with his parents by the Chinese government and was replaced by another Tibetan boy who was set up by China. Nobody knows their whereabouts until today. Another one was a vivid color board set up across from the temple gate showing the dead bodies of Tibetan monks tortured by Chinese officials. “Red handed butchers” it said. During my stay I read the biography of Dalai Lama and was impressed to read that even after all of these things the Tibetans should not hate China, that hate does not bring anything. On the surface it looked like the Tibetans lived very peacefully in India. However I learned that there are quite a few problems also. One of them is the occasional tension between Tibetans and the local Indians. Few months before I arrived, a young Tibetan man was stabbed to death while trying to protect his girlfriend from 3 drunken Indians. Tibetans could not raise any voice about this because of their refugee status. Another issue was the isolation of young refugees who fled from Tibet alone to India. Apparently there exists a hierarchy between the refugees and the ones who came earlier were not very welcoming to the new ones.

Without any family or friends, the young refugees faced tough reality where they thought they could find a much better life than before. Once they had risked everything to cross that deadly border, there was no way to go home or to see their family again. My days in Mc Leodganj mostly consisted of cooking at Yuki’s home. She had brought many ingredients from Japan so I was able to cook food I had not eaten for almost 2 years. One day I got so excited of eating Japanese pancakes that I ate too many and couldn’t move anymore so I fell asleep on her bed without returning to my guesthouse. It was embarrassing the next day. One of the evenings, Yuki’s neighbor Nima invited us for dinner at her home. She was born and raised in Bhutan after her parents fled Tibet. She studied in Japan for a cultural exchange so we could communicate a bit in Japanese too.

Nima said that because China is using its money to influence countries in Asia like Bhutan, Lao and Cambodia, she is now taken away rights which she took for granted like voting. Historically Bhutan is a part of Tibet and they had welcomed the Tibetan refugees as family but nowadays they started to discriminate them.

Bhutanese food is known to be very spicy. She made a traditional dish of chicken cooked in red pepper. It was creamy and delicious. Nima’s monk friend joined the dinner and we got to hear his stories from the Tibetan monastery in Nepal. Everything was so calm and peaceful in Dharamsala but being a champion of mishappenings, destiny did not let me leave this town without another crazy story to tell my grandchildren…

One morning Yuki took me out for Indian pancake breakfast saying that it would be nice to eat something different than Japanese or Tibetan. I agreed. The small restaurant on the second floor was crowded with locals ordering a pancake with a big omelet on top served with vegetable curry. The curry was especially tasty and I kept dipping the pancake in it until one moment when I discovered a small piece of hair sticking out from my curry, probably an eyelash guessing from its thickness.

“Just another piece of hair” I thought, because it was so common to find hair inside food in India, so common that when I didn’t find it, it felt like I was missing something. So as usual, I tried to pull it out and discovered that it was a bit longer than I imagined. “Hmm, Indians have long eyelashes, hey” Then I pulled out even more to discover that it was the antenna of a cockroach!! I freaked out and dashed downstairs with a glass of water to rinse my mouth in the gutter outside; there was not even a bathroom in the restaurant. Then I ran up and explained the situation to the waiters. The Indian boys said sorry with a confused look and that was all.

As I sat down again overwhelmed with shock turning my face white, Yuki said she was rather surprised that I am so shaken by “such a small thing” after traveling for nearly 2 years. To my surprise, she kept eating her curry which was cooked in the same pot as mine. Despite her sophisticated look that could fit her back into a Japanese office from tomorrow, Yuki was a hardcore traveler at heart. I was ashamed of myself.

During the 6 days in Dharamsala, I couldn’t do any volunteer or make myself useful in anyway to Tibet but I was glad to see the village and people living there. My desire to go and see real Tibet became much stronger. I said bye to Yuki and departed to Amritsar, my last city in India.