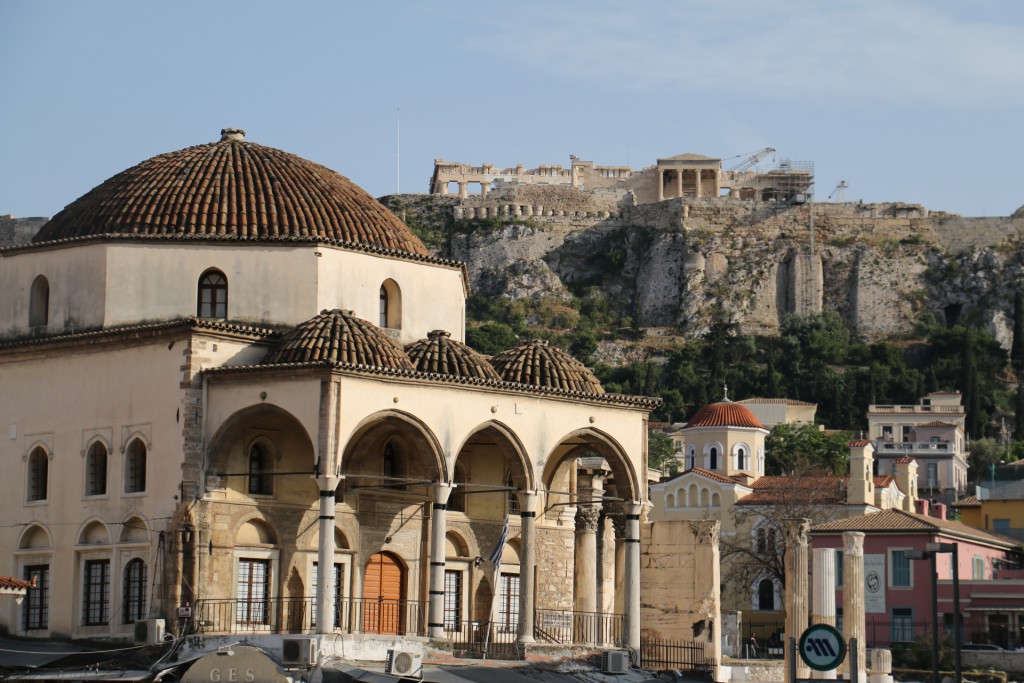 On May 6, I took a flight from Tel Aviv to Athens.

Since I left Berlin on January 8, it happened to be that I was traveling in the Middle East for 4 months (total of 5 months if I include Iran!) It wasn’t very easy as I often got harassed as a woman and by being mistaken as a Chinese person (the anti-China sentiment is strong in the Middle East), but more over I was blessed by the friendliness and the warmth of the people. I enjoyed seeing the top class ruins in the world and traveling through the rough desert landscape was definitely my cup of tea. I am sure to return there very soon. When I arrived in the city of Athens, I was impressed by the beautiful buildings. It wasn’t as heavy looking as the other European countries because they were all white and more modern. Someone told me that they were mostly built I the 60s and the 70s. I loved the retro style.

Not only the townscape but also very simple things like not having to get hassled or attract everyone’s attention when walking down the street made me feel very happy. People followed traffic rules so I didn’t have to bear the horns and yelling. I wasn’t always covered in fumes and was able to safely cross on a traffic light. Things that I always took for granted before, seemed like such a nice sophisticated thing and I realized how much I missed the “civilization”. I was almost in tears. That day instead of going sightseeing I went shopping for clothes. Even though I’m a budget traveler, it made me look worn down to wear the same clothes for 9 months and I thought it would make me happier so I bought a few dresses at H&M. For someone who’s used to spending $2 per meal, a $25 dress times 4 wasn’t exactly cheap, but I was satisfied.

Also Ayumi who I met in Palestine strongly recommended me to use a skin toner and good sun screen so I replaced old my supplies. I was too cheap and lazy to buy a toner for 4 months, but when I put it on my skin I felt that it really needed it.

I checked in to the cheapest hostel in Athens which was 10 euro. However they said that they’ll be full from the next day, so I had to look for a new place to stay. The next day, I received a message on couchsurfing. I had posted an open request on the Athens forum a few days ago, and a guy who owned a flower shop in the city centre invited me to stay with him. I decided to visit his flower shop to make sure he was a normal guy.

Mihalis’s flower shop was located in one of the most expensive streets of Athens. He loved flowers and enjoyed riding motor cycles too. I got along with him well, so I asked him to host me for a few nights and he generously accepted my request. Until he finished work, I went sightseeing by myself. Acropolis. Because Mihalis said that you can see most of it from the outside, I didn’t go in. H&M in Athens is a cool mix of classic and modern. Churches in Athens. I loved the colors. In the evening, I went out for a drink with Mihalis and his friend Maro. To not make the same mistake in Palestine, I strictly stuck to fruit juice. Since then I was very careful with alcohol.

Greek people had completely different eating habits compared to Japan. They only ate 2 meals per day. In the morning they drank a strong Greek coffee (same as Turkish coffee) instead of having a meal, and they had the main meal of the day around 2 to 3 pm. For dinner, some people had light things like salad or soup, but others didn’t eat anything at all. Mihalis said that traditionally people ate a big dinner around 9 to 11pm, but for health reasons many people had stopped doing this. Therefore drinking out with friends meant drink only. For someone like me who was used to having something to eat with drinks, this was rather strange and I felt like there was something missing. We chatted til midnight and went home on the motorbike.

The next morning, we woke up early to go to the flower market to stock up for Mihalis’s shop. A generous old man gave me these flowers. An old lady on her way home after the flower market. That day Mihalis took me to the beach in Athens after work. Not many tourists visited the beach in Athens but it’s very convenient to go there; 10 mins by car and 20 mins by train. The Greek people say it’s a filthy beach but I thought it was quite nice. If this was filthy, my hometown beach on the Atlantic Ocean will be a dump. As soon as I arrived, I jumped into the water but came back right away because the water was ice cold. While sunbathing, I spotted a little Japanese boy who came to swim with a Greek family. He was probably an expat’s child. I realized the difference of Japanese and foreign upbringing when I saw how polite and well mannered he was compared to the other children. However I thought that politeness wasn’t always necessary in a foreign country; it might make him suffer more.

After coming back from the beach, I made bacon spaghetti for dinner. Actually the main reason why I came to Greece was to eat pork. In the Middle East I continuously dreamed about eating bacon for the past 4 months. I was originally planning to fly to Turkey directly from Israel, but Turkey was a Muslim country and Central Asia, Nepal and India which I plan to visit after were pork free areas too. I couldn’t bear the thought of not being able to eat pork for the rest of the year, so I decided to make a detour to Greece.

The smell and crispiness of the slowly cooked bacon could not be replaced by anything. I was on cloud nine. During my short stay in Athens, I mainly enjoyed being back to city life and forgot most of the sightseeing.