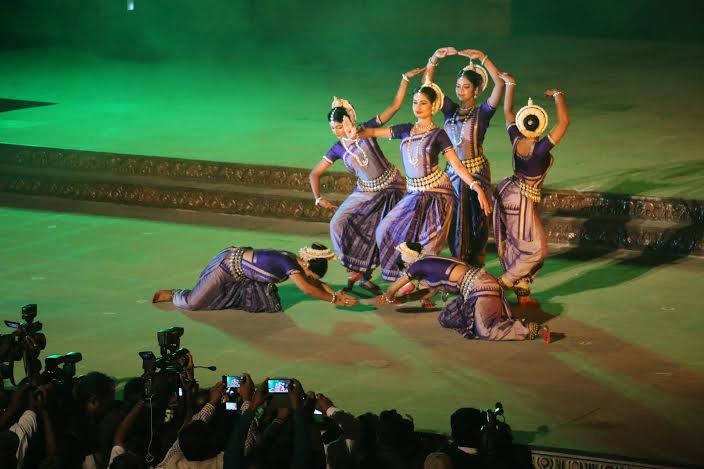 Since there isn’t much to see in Puri, we rented a scooter for a few days to visit the surrounding areas. About 35km from Puri is the Konark temple, which is dedicated to the sun god Surya. On the way to there, we drove past lush green paddy fields and a bird sanctuary full of palm trees. I saw a beautiful white heron resting on top of a black water buffalo. This scenery reminded me of the summer time in South East Asia. It was a real treat for the eyes. (but I have no pictures, sorry) Konark temple was packed with Indian visitors. Unfortunately the admission for foreigners was 25 times higher than Indians, so we decided not to enter and observe from outside. Overall this wasn’t a bad idea because we didn’t miss anything except for the close-ups of Kama sutra style sensual carvings. On the way back, we stopped at a wide empty stretch of the Bay of Bengal where the sun slowly set. On the evening next day, we went again to the Konark temple to see the Konark Dance Festival. The state of Orissa boasts excellent dancers in which many of them proceeded to the stages of Bollywood. If an actress was to be very skilled at dancing, it was often the case that she was from Orissa. Therefore it was one of the most prestigious dance festivals in whole India. The venue was located in front of the lit up Konark temple and decorated with thousands of illuminations. It was broadcasted on TV and countless cameramen surrounded the stage once the show started. I was totally breath taken by the silk-like movements of the dancers. Each finger and each toe moved in perfect order and in great complexity. It was elaborated and sophisticated. I was impressed by the choreographer who didn’t simply design the dance to be symmetrical but slightly asymmetrical. I was especially impressed when the dancers rolled their backs on the floor making a sweat mark on the concrete. Even the pattern made from sweat was part of the choreography, I’m sure. The live performance of sitar(Indian guitar) and tabla (drums) made the stage even more ecstatic. During the 3 hour performance, I couldn’t stop asking myself what a country I came to, what a deep and rich culture it had to offer. (This is a performance by the same company a few years before. Incredible!)

I wrapped up my week long stay in Puri, by visting Lake Chilika to see the Irrawaddy dolphins which is a native species to the Bay of Bengal. We took a private boat tour which constantly tried to milk us by selling pearls which a guy freshly removed from a shell, or taking us to a beach hut where 5 men tried to convince me to order over-priced seafood. In the end we did see Dolphins, but they were a humble kind so they didn’t jump or make cute noises. We only saw their fins. After Puri, we decided to take a train to Hampi, a town famous for its unique rocky landscape. Since the ride was so long requiring 2 full nights on the train, we stopped in Hyderabad, a big modern city known as the cyber capitol of India, to divide the ride in two.

Other than the modern side, Hyderabad used to be ruled by Muslim dynasties for half-millennium so majority of the population were still Muslim. It was interesting to see many Arabic signs in the streets and people mixing a few Arabic words in their conversation. When I heard taxi drivers yelling “Yalla! (let’s go)” or “Haras! (stop it)”, my mind recalled the 5 months I spent in the Middle East and left me in nostalgia. My Vietnamese friend Vicky who I met in Kyrgyzstan told me that, despite the fact that there is pretty much nothing to see in Hyderabad, it was worth visiting just for the biriyani, a local specialty rice dish. She was right. The waiter served a pile of overflowing pungent saffron rice in front of me which the most tender chicken was buried inside. As soon as my finger reached my lips, the mixture of spices and aroma blew my mind. I repeated “This is delicious” ten times until I could no longer eat from food coma. Hyderabadis surely know how to cook. With a great satisfaction I boarded the next night train to Hampi. In the compartment, Xavier and I played cards for hours with much enthusiasm. I thought that perhaps moments like these are most precious than visiting sites together, and that one day I will recall it with great warmth in my heart.