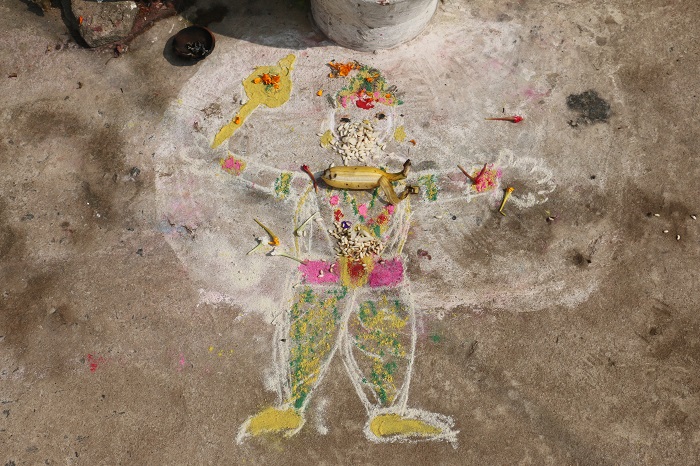 Hi everyone! I’m sorry that I could’t write regularly. Yesterday, I have arrived back to New Delhi after 4 months of traveling in other parts of India and Sri Lanka. When you spend a nice 3 weeks in relatively modern Sri Lanka, everything in India strikes you as a shock again.

When fresh juice shops use an unwashed blender cap soaked in sink water, when a chai guy dunks a big spoonful of sugar when you request “little sugar”, when a man responds “yes, yes” to your question asking where the metro station is, or when you see a homeless guy roasting tomatoes on the ground, you know you’re back again. One thing very different this time was that almost no one hassled me while I was walking from New Delhi metro station to Paharganj , the infamous cheapy guesthouse area with a giant backpack. Couldn’t look more like a tourist. Then I found out why from the only guy who spoke to me (a gentleman who showed me where to go from kindness); he thought I came from Nepal.

I thought I looked hot with my south Indian tan so I’m a bit sad to know I look hard working instead. But anyway, I’m safe and sound back in long sleeve weather New Delhi, even if the cold shower is brutal on an ageing 29 year old body. Today, I wrote a post about Puri, a town I visited last December.

The state of Orissa on the east coast of India is one of the least visited tourist destinations. Even on the Lonely Planet guidebook, they mark very few pages compared to the other parts of the country. Many groups of tribal people lived inland but without a permit it was not possible to visit them. The reason I decided to visit Puri, a small fishermen town in Orissa was because I hadn’t seen the sea since I left Turkey in August.

In Puri, I stayed at a Japanese guest house. That’s basically a place owned by a Japanese person or a foreigner who hosts many Japanese travelers. It existed almost anywhere in the world and I avoided them as much as I can because there’s no point hanging around with people back home. Only this time I was attracted to the price, 250 rs (3.5 USD) for a private room with 2 meals. After that merciless food poisoning in Varanasi, I was a bit worn out of my travel in India and needed a place to rejuvenate again. First it felt strange to be back suddenly in the Japanese speaking world. Unlike English, our language is still very old fashioned and required the speaker to talk formal until they got to know the other person well. Therefore I always felt more comfortable speaking English rather than bearing the slight awkwardness in Japanese.

However, everyone at this guesthouse was kind and caring for both Xavier and I, so I quickly got used to this unique environment. One day they even offered fresh sashimi! The guesthouse also ran an Ashtanga yoga school, so I joined and practiced yoga 4 hours every day at sunrise and sunset. There were only 3 students including myself and we had the same number of experienced Indian teachers. Each time after class, I was filled with great satisfaction, energy and happiness. One morning Xavier and I visited the beach which was only a 5 minute walk away. On the way we walked through a fishermen’s village that was quite primitive, simply just wooden shacks standing on the sand. We tried to talk to the locals and take pictures of them but while most were genuinely friendly, some demanded money which left us a bitter after taste. From a distance, the beach looked very wide and water seemed quite clean too. By the sand, we spotted many fishermen sitting next to their boats, fixing the nets with their hands. A women came walking from the village with a big basket of laundry and started to dry them on the sand. What I really don’t understand about the Indian people is that, they take such a long time scrubbing and rinsing the dirt off but then, they leave them on the ground. I’m pretty sure that’s how they like it because I often saw empty laundry lines right next to them. Probably it dries faster that way. Someone said that maybe these culture differences in India are just a matter of perception. If they think it is clean, it is and because we think it is dirty, it’s dirty. Passing the laundry on the ground, I walked closer to the sea. When I stepped beyond the wall of fishermen boats, the full view of the sea spread in front of me. At the same moment I saw something that I didn’t quickly comprehend. Many people were squatting near the water’s edge. Something looked wrong. Then I realized the brown coming out from between the legs. When they finished their businesses, they washed their bottom with sea water. It left us speechless as I had just ate prawn curry. Xavier and I left the beach without saying much, and our desire for swimming smashed into little pieces. We later learned that in the fishermen’s village, most families had no toilets. In a way, I am impressed by how generous the Indian people are, to give back to the nature so immediately. They seriously don’t waste a single thing. Man, I thought. What a short circle of life. Despite of this shocking truth, I couldn’t stop eating fish and other seafood while Xavier stayed strictly to chicken. My craving towards seafood seems even stronger than fear of salmonella or eating a bit of poop. Oh the Japanese race.

I also visited the cremation ghat in Puri. Unlike the ones in Varanasi, the cremation here was not done by the water and instead it was held at a compound near the beach. When I entered the 2 tennis court sized ground surrounded with concrete walls, a man’s corpse was being burned in the middle. The place looked empty and solid. It was scorching hot that day, so I observed the cremation from the roofed corner. I could see that he was a very young man. I imagined how he was still alive until yesterday and full of life when I first arrived to India 3 weeks ago. There were less than 10 galleries other than me. Most were young Indian men killing time not having anything else to do. One young western woman started to take pictures of the burning body with her smart phone but no one said a thing. It was highly disrespectful and if this was in Varanasi, people would have stopped her right away.

Dirty looking water was leaking from the filthy toilet in the other corner, almost reaching the burning ground. The dom (burning professional) was not very enthusiastic about his job and left one whole leg out of the fire for a long time until he shoved it in with a bamboo stick. I couldn’t stand to be there for more than 30 minutes. This ghat only reminded me of a garbage disposal plant. It was very painful to watch a person’s life ending in such a way, so I left. Close to the burning ghat was the Jagganath temple. It is a temple which worships indigenous gods from Orissa, Jagannath, Balabhandra and goddess Subhadra who are now considered as Hindi gods. Every year during Ratha Yatra festival, the icon of 3 gods are carried out to town on a huge wooden wheel structure and devotees used to throw themselves in front of the wheels, before the British came and outlawed this religious suicide. This is where the word “juggernaut” came from. Unfortunately we were not allowed to enter as admission was restricted to Hindus only so we only observed the temple from outside, that looks like a giant ice cream sundae.