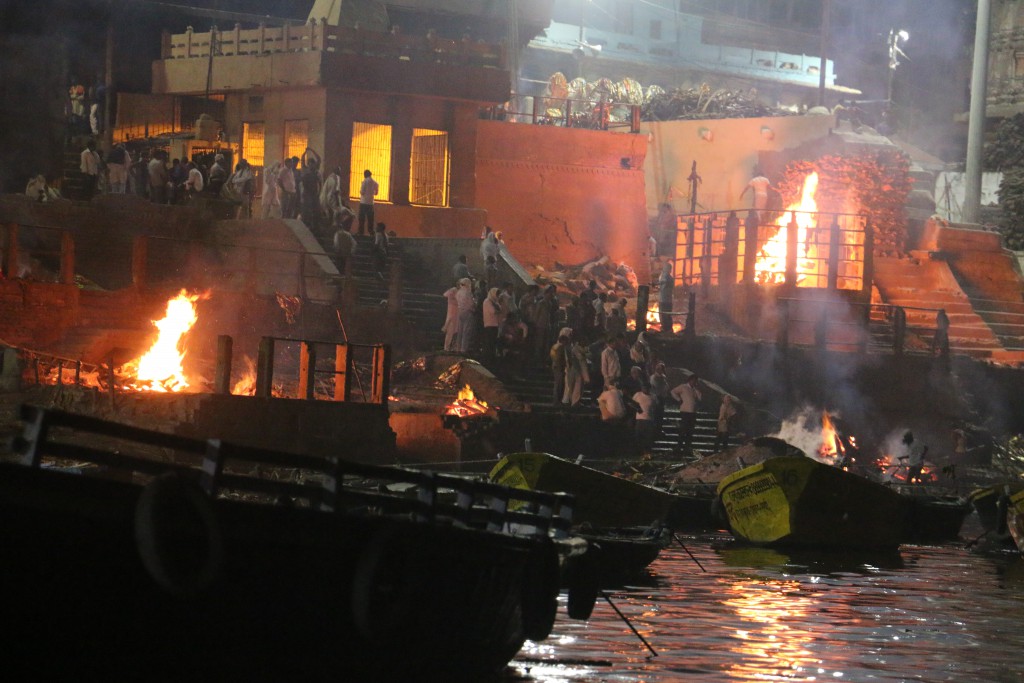 When our 15 hour train from New Delhi reached Mughal Sarai station where Damian’s private driver picked him up, I was invited to join his ride and from there we headed to the Hindu’s holy town of Varanasi, the most famous and infamous place in India. From the car, I saw pigs eating garbage and also passed a tunnel flooded with dirty water from a broken sewage. I was glad that I wasn’t a cyclist.

After separating with Damian at his hotel, I walked down on the narrow streets of vegetable sellers to meet up with my friend at his hotel. When I passed the corner, the great Ganges River suddenly appeared in front of me. It was a strange feeling. I have never been here before but because I have seen it so many times on pictures and read about it for years, it looked familiar. For Hindu’s the river itself was a transformation of a goddess.

Many people sat at the ghats (ghat is a series of steps leading down to a holy river) doing various activities such as yoga, bathing, making offerings or cutting hair. It is so amusing and you could easily spend days just watching the people there. Everyday in Varanasi is a festival of life.  (My friend Xavier captured them very beautifully so I borrowed his pictures. All photos in this entry except for the last 8 belongs to him) There were holy men who dressed in orange and painted their face white with the ashes of the dead. Apparently this symbolizes the fact that life and death are two sides of the same coin. They asked for money when you took photos of them and made a little blessing on people’s foreheads using red tikka powder and human ashes; not really different from normal beggers but very classy. At the hotel located on the Meer Ghat on the Ganges, I reunited with Xavier, my Belgian friend who I traveled together in Central Asia for 3 weeks. He had arrived in India a few weeks before me and was waiting for me to join him. At night we saw the beautiful Ganga aarti (worshiping ceremony of the goddess of Ganges river), performed by 5 male priests every evening by the river. They played bells to the music and performed various fire rituals that were just so beautiful that it made me feel like I was on some high drugs. Next day I took a stroll with Xavier and Damian along the river visiting all the ghats. Damian said that he saw a floating body in the river before he met us. In the Hindu world, certain deaths like pregnant women or children are considered to not have accomplished their life, so their bodies were tied up with rocks and thrown into the river instead of being cremated to reach nirvana. Varanasi was a special place where all Hindu’s wished to be cremated and then have their ashes washed into the river. I was not really ready to see this yet, but a cremation ghat appeared on the way, so we sat down and watched the cremation. First you hear a chant of men carrying a dead body on a bamboo stretcher, wrapped up in bright colored cloth and topped with marigold flowers. Relatives carry it from the town to the river, so if you’re walking in streets near the cremation ghat, once in a few minutes a corpse will pass by. Once it arrives to the river, they dip the corpse into the river which is incredibly filthy from the remaining ashes and offerings, and “purifies” it.

Then they place the corpse on piled firewood that looks like a camp fire and have a Brahmin (holy men) perform rituals. After about an hour, the oldest son of the family sprinkles incense powder, holy water, oil and all sorts of holy things and then lights up the corpse from the feet. Sometimes the arms or the legs rises in the fire as if they were still alive. Occasionally the Doms (burning casts) shove the non burnt body parts into the middle of the fire with bamboo sticks which they disassembled from the stretcher. No one cries because it is considered that crying interferes the dead from reaching nirvana. Death was not a sad thing here. It was just one circle of life. Next to the burning ghat, laundry men washed piles of sheets by striking it to the steps, covered with ashes of the dead. Dogs carefully approached the corpse to get a bite of “left overs” before the doms would smack them with a bamboo stick and the goats went crazy eating the bundles of flowers that were removed from the dead body.

It took about 3 hours to burn everything. It was surprising how just in a short period of time, a human body turned into something that isn’t. This made me realize how transitory life is. When the skull pops, making a small explosion, it sounds like the last cry of the person. In the end, the doms shove away the ashes in to the river. It was the way how they mourned for the dead from ancient times and seemed incredible that nothing has changed despite of fast moving world.

The thing that shocked me the most was a poor man’s corpse, not being able to afford enough fire wood, being burnt on the left over wood of a rich man. He cannot escape his miserable destiny even after his death. I always thought it was horrifying to watch a man burn into ashes. I read stories about some travelers who threw up seeing it or couldn’t eat meat for a month (such pussies).  To my surprise, I found the whole procedure to be very natural and somehow even healing, even though the smell of burning flesh was unbearable from time to time. I found watching cremation to be an ultimate form of meditation. Everyone around sat down and watched the fire, quietly thinking about the day which no one can escape; their own death.